Excursion to the naturist farmstead in Grabow on September 14th, 2019

After our numerous nude hikes this year, in Dreilinden, in Dreilinden, at resin, at Elbe Sandstone Mountains, and finally the extremely successful nude hike in the Müggelbergen, there was a cry that it couldn't have been, and you can't, and do it.

And so it was decided unanimously in the usual democratic process (i.e. by our chairman) and in my absence that I had to take care of another hike in my function as a hiking keeper. That was the start and finish Naturist homestead at Grabow Chosen ... I have never been there, as I pleaded extensively, but this did not dissuade anyone from the conviction that I would be excellently suited for this task ....

The Naturist homestead (http://www.naturistengehoeft.de) belongs to Friedhelm and Margret, who have prepared it with much love and hard work over the past 20 years. In addition, they are zealous promoters of free-body culture in the area, so it is now generally accepted to walk or cycle naked in the whole area.

The plan was to travel by regional express and bike. The weather should be very nice for the season, so we were 10 1/2 happy companions, with 9 bicycles, because one wanted to walk the 5km distance to the farmstead. Fortunately, the bike compartment was largely empty, so we reached relaxed after 2 hours Grabow. Our hiker started walking, the rest of us saddled our bicycles and conquered the place. 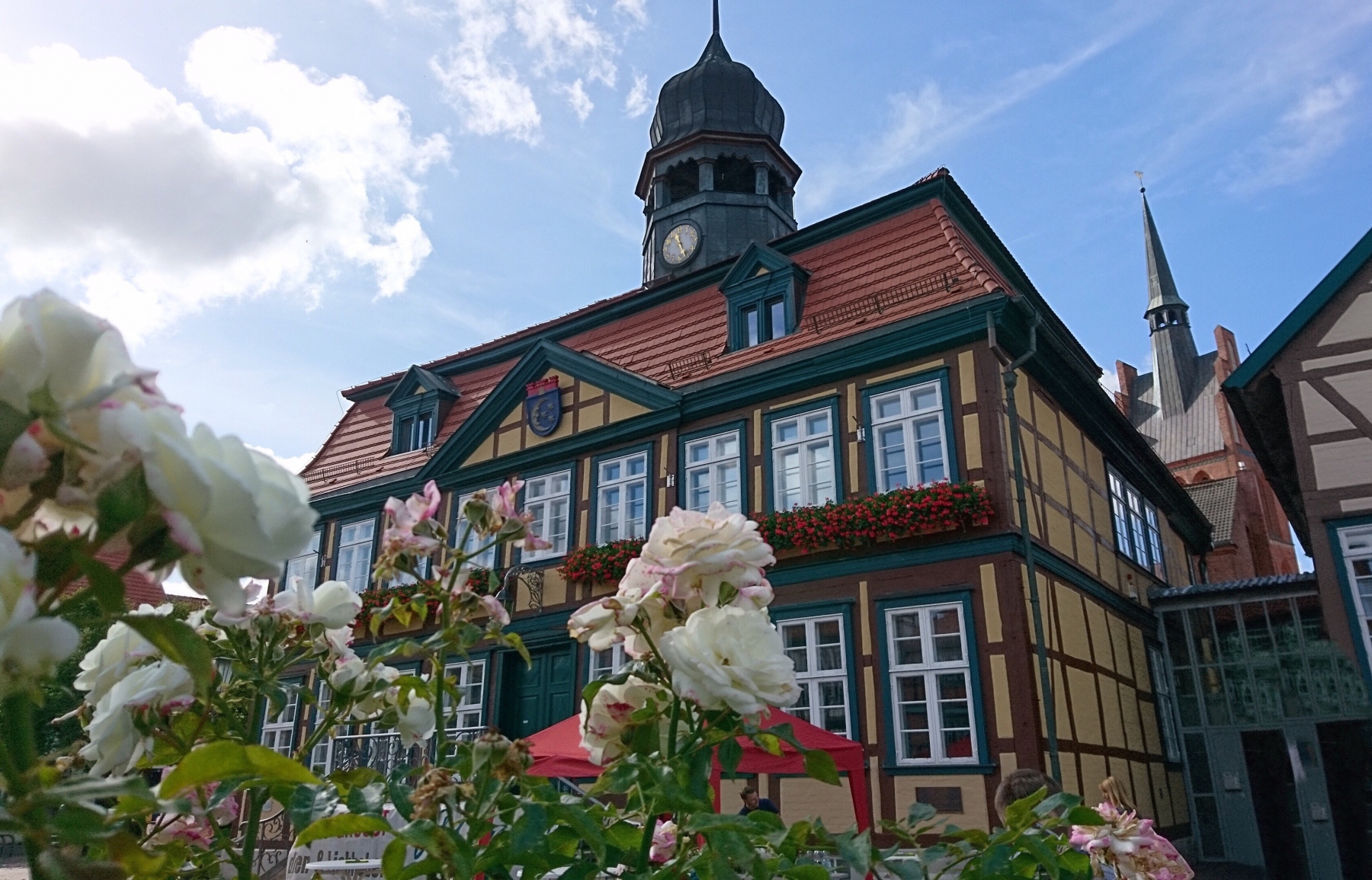 Grabow is a beautiful little place with cute houses, especially if after leaving the train the sun comes out behind the clouds.

According to Friedhelm, we could cycle naked along the river after leaving the place, it was a bit too cold for us at the moment (which luckily should change during the day). At the river we met our individual hiker, who was already way ahead because the bike group had gotten stuck in the village, for sightseeing, chatting and forgotten provisions at the bakery.

After 20 minutes along the river we reached the farmstead, where Friedhelm greeted us warmly and led around. He already had a guest, a camper who was already lying naked in the sun for the rest of the day.

Following this example, I immediately used the guide to largely lose my clothes on the premises. 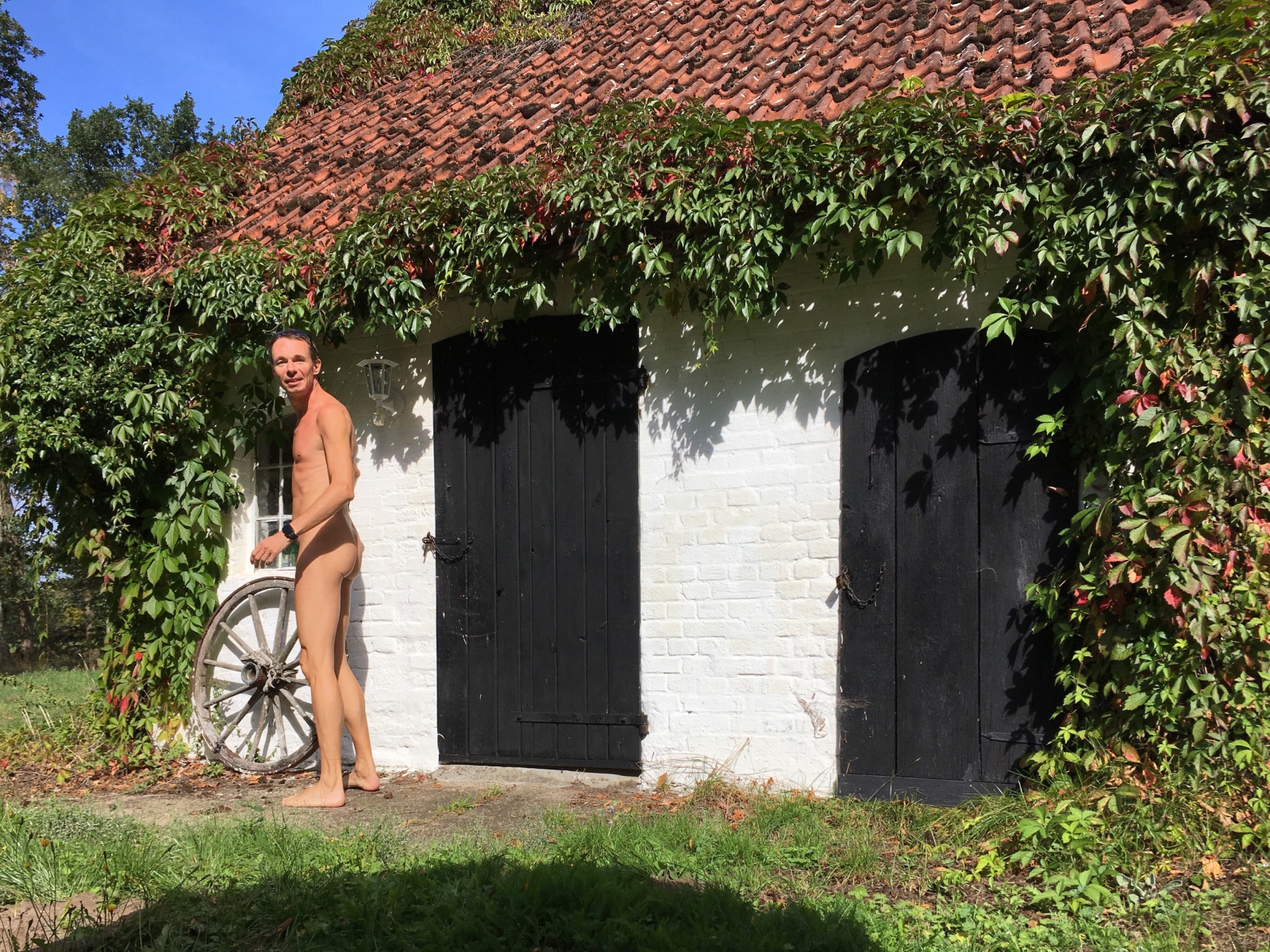 Where are my things

The further plan was to wait for our missing people (the hiker and the bakery shopper), and then stroll over to the river, where there would also be a swimming area. Unfortunately, I hadn't heard the exact explanation, because an important phone call caught me at that very moment. How unsuitable, I was actually hoping for poor cell phone coverage here in the country. Fortunately there was no WiFi, otherwise I would have the whole day Fortnite have to gamble. 😮

In the meantime the others had also gotten rid of their clothes and were spreading out on the meadow or exploring the grounds. 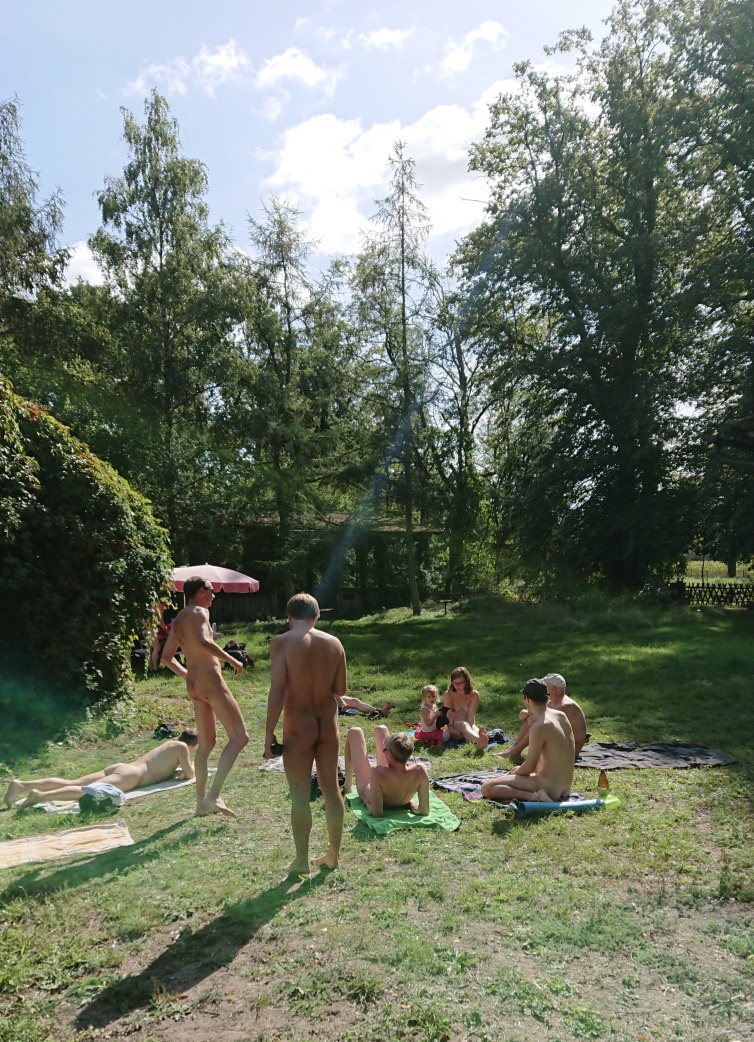 After half an hour we were all complete again. We deposited our belongings in the barn and went out, armed only with towels and shoes.

I gave up the latter following a spontaneous inspiration. The short distance to the river, you can go barefoot. After all, I'm on the whole Elbe Sandstone hike too, ahem.

Unfortunately, after 100m, the path mutated into one of these very hiking-suitable gravel paths, and the river was still further away than I had assumed (I would have been better paying attention to the explanation), so we trotted along a bit with our offspring, and when we finally ended up on the When the bridge arrived, the vanguard was already on the other side of the river looking for the bathing place.

Search picture: Where are the naked women?

Watching instead of phoning didn't help them either, because they still couldn't find the bathing spot. Ha!

So we first walked a good distance the other way along the river, at a leisurely pace, as it should be for a Sunday walk on Saturday. 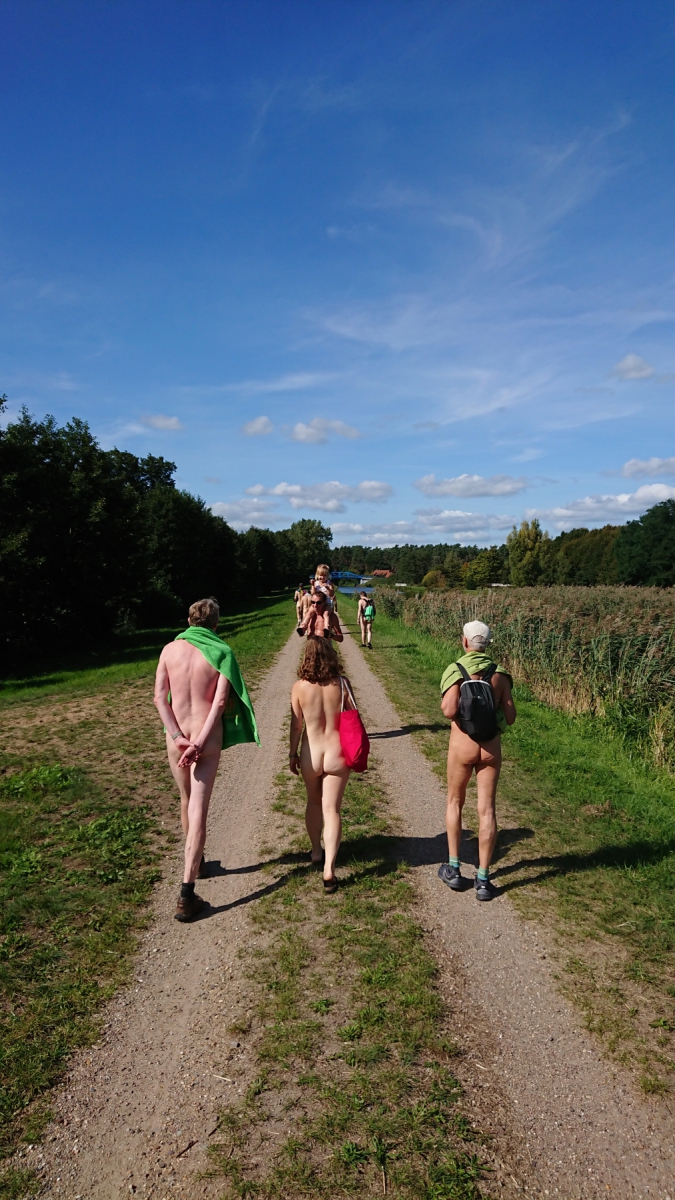 And I even had a passenger 🙂

The path continued on and on, along the river, to another bridge, and yet another, but no bathing opportunity was in sight. In my capacity as a tour guide I should have been more careful. Although, I said I didn't know the area. Why doesn't anyone ever listen to me? 🙂

Finally we decided to turn around and try this beautiful green bank, which we had spurned at the beginning. 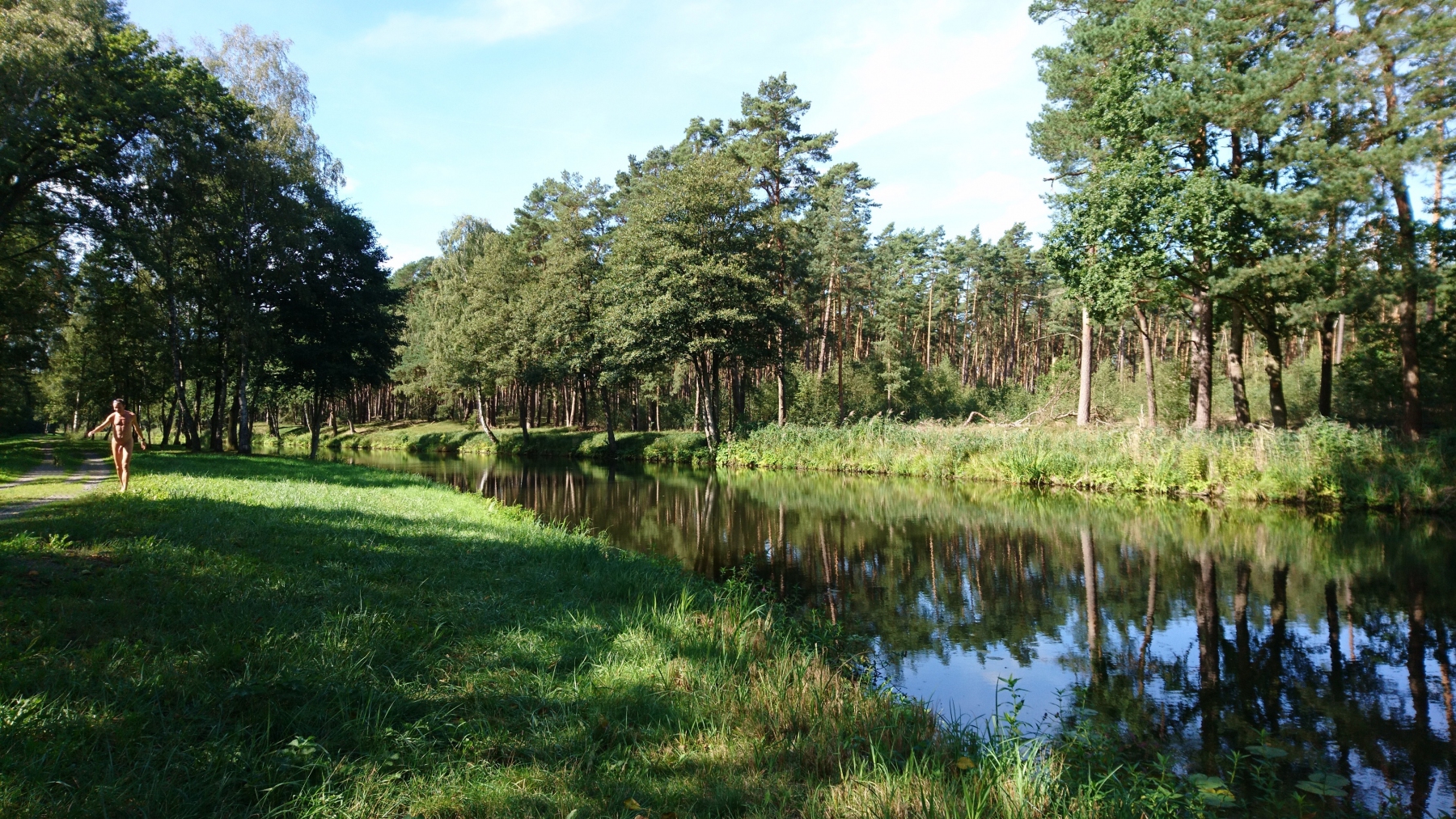 The tour guide determines the situation

The place was beautiful, the grass was soft to lie on, there was a nice sunlit spot. We spread out our towels and enjoyed the peace in nature. Only every 20 minutes you had to turn to take the moving sun into account.

After a while we even got a visitor: 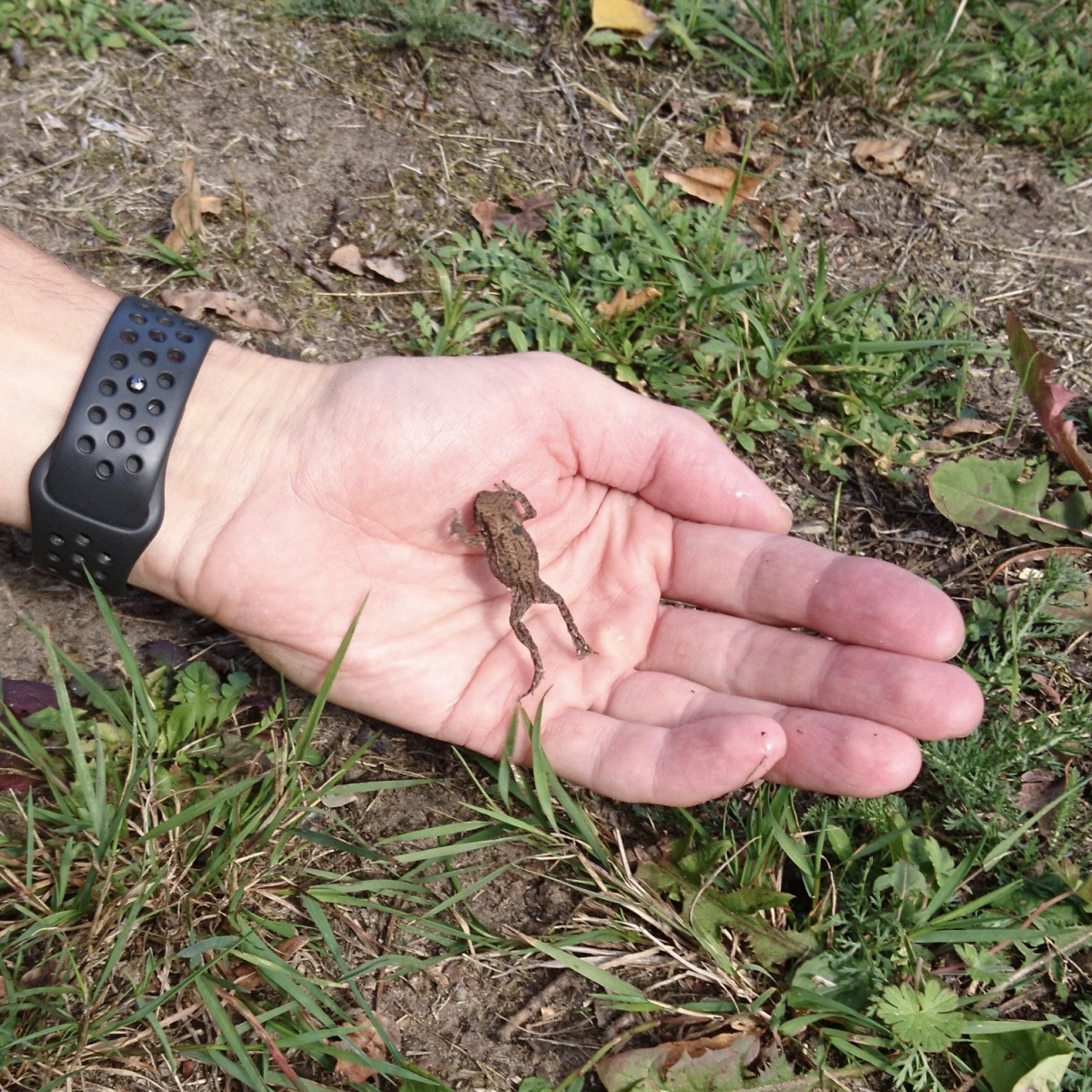 Certain people who do not want to be named even dared to go into the water ... 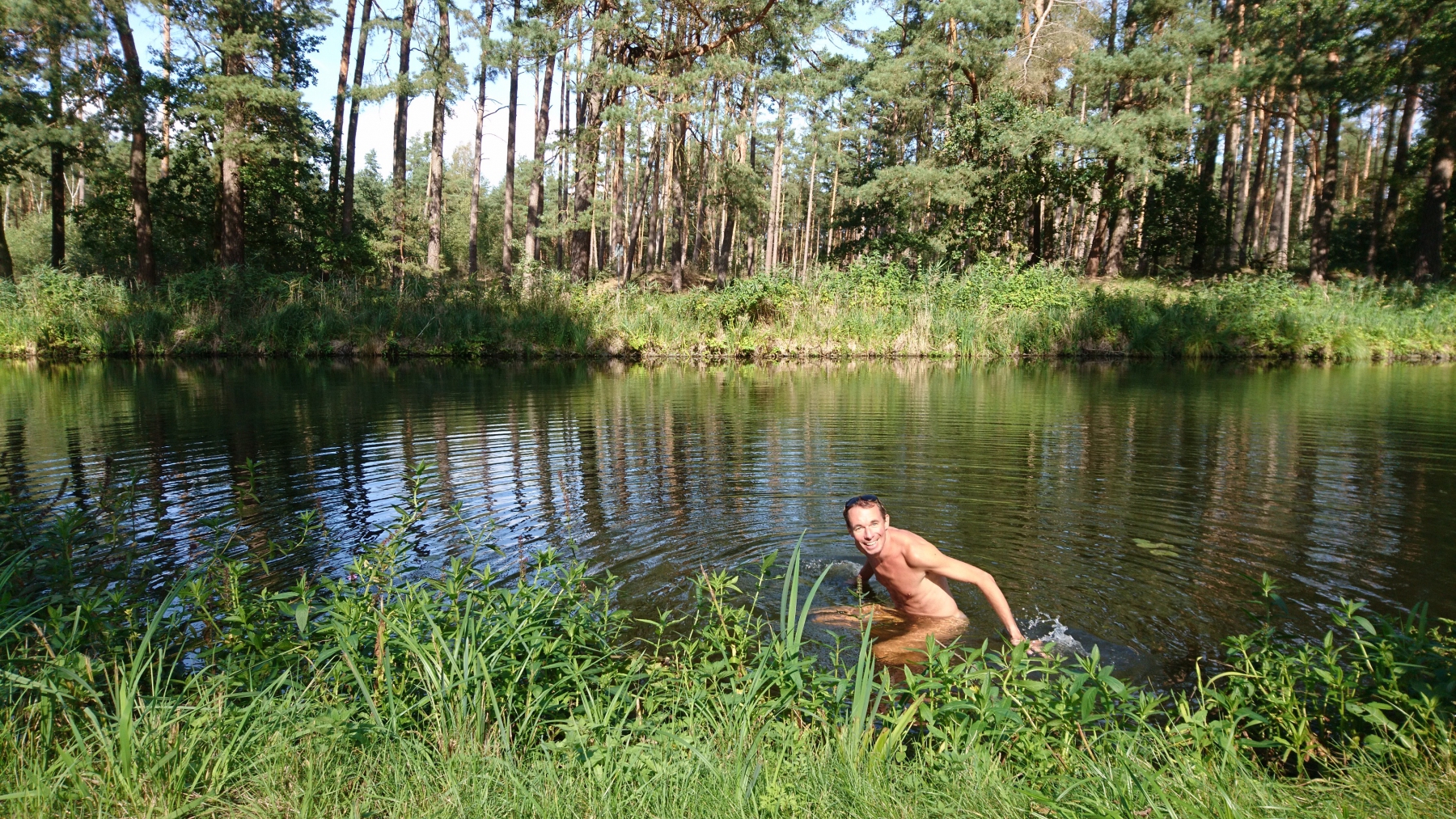 It was nice. The weather meant really well with us, the sun warmed us up well, and so some of them could even jump into the cold water several times or even swim all over. 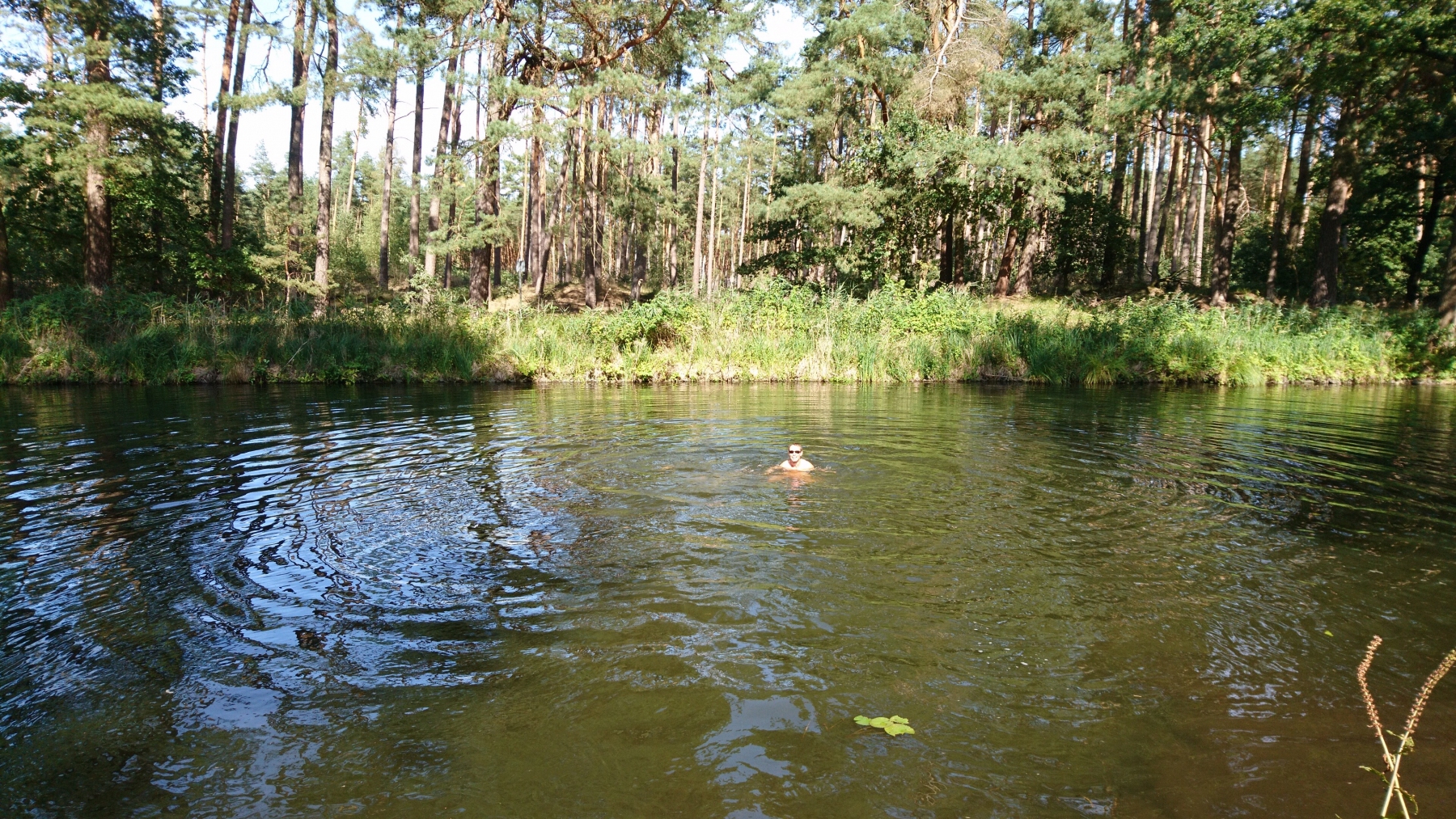 After a while we noticed that the only thing we luckily lacked was something to eat. Wouldn't it be great to have a picnic here now? We were equipped for that.

Unfortunately, all our things were in the barn 15 minutes away. What a pity. As one of the winners of this year Naturist run of course I immediately offered "Quickly" to run over and get everything. Fortunately I had no shoes with me, otherwise I would have had to do it smoothly ...…

When hunger finally outweighed the laziness, we made our way back to the homestead, set the table, which was still beautiful in the sun, and let it taste good. 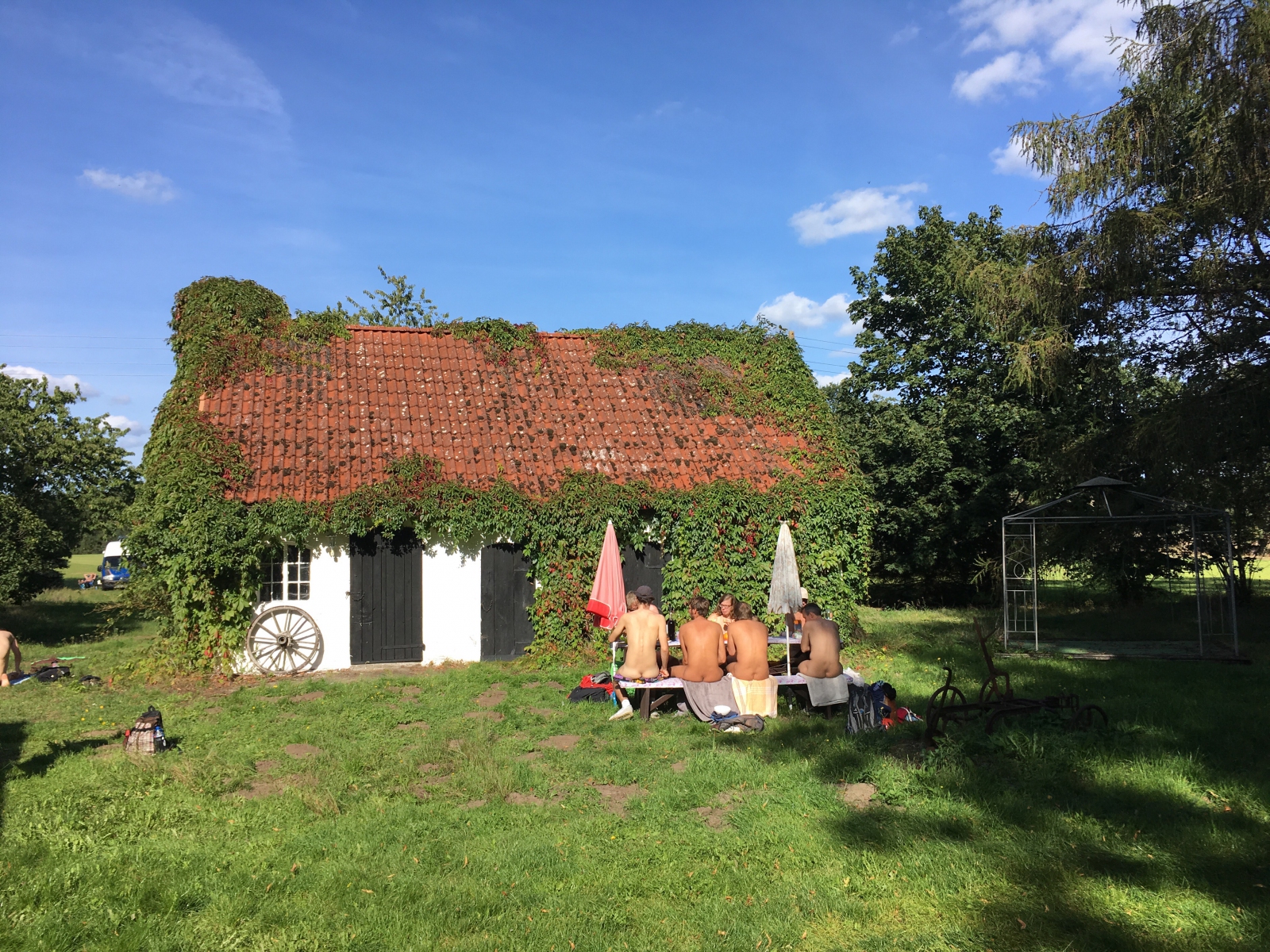 Friedhelm had somehow noticed that we had a bottle of wine with him, so he joined us at the table with a bottle of sparkling wine. 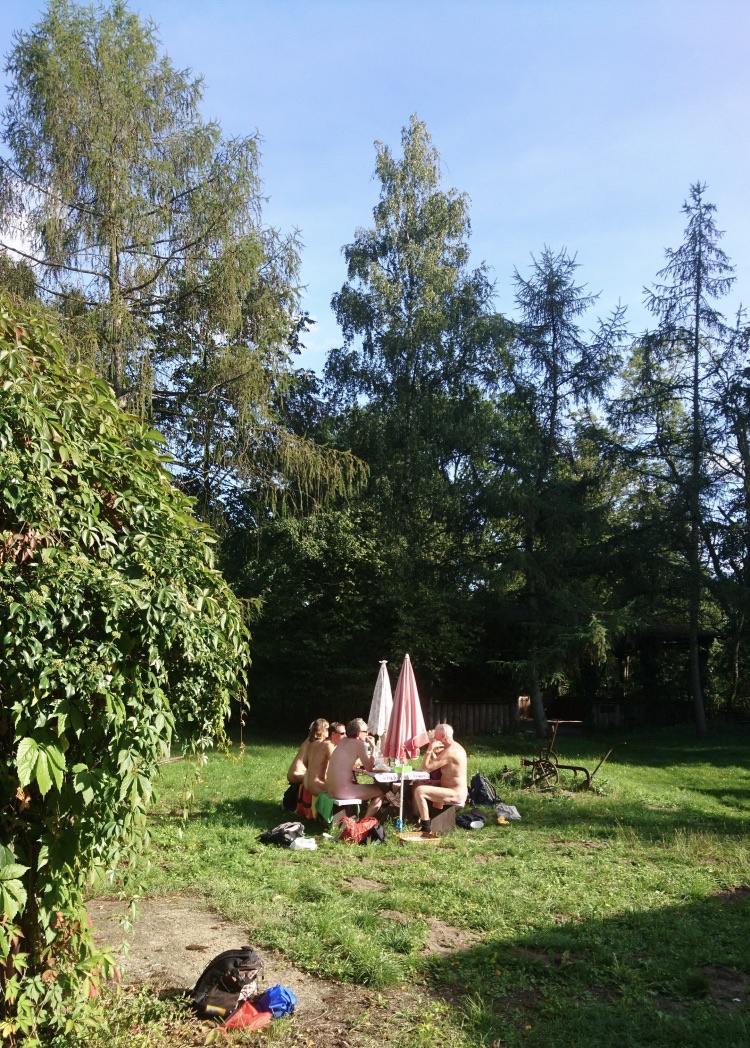 It was a really nice mood, no stress, no appointments, nice weather, Friedhelm told about his life and the time on the farm, and how everything has developed over time. We had a delicious meal and clinked glasses of champagne and red wine.

The afternoon slowly grew, and the shadows grew longer. Some made themselves comfortable on the lawn again ... 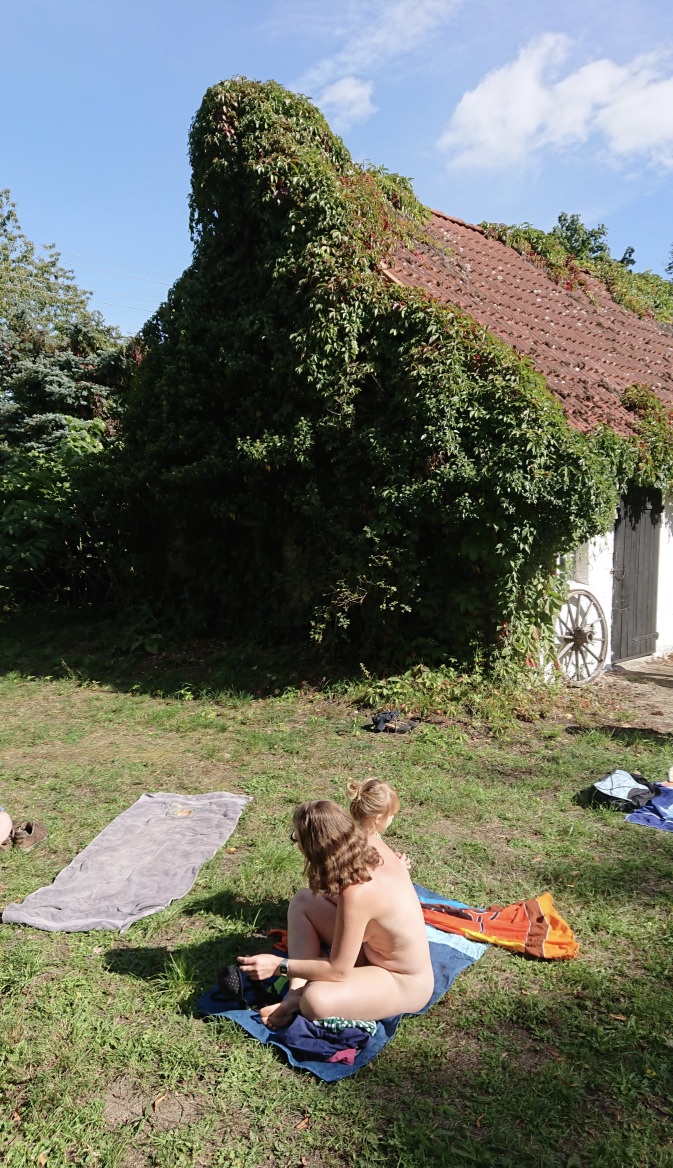 A place in the sun is still free!

... the rest of us tried a spontaneously improvised round Dance Impro. Fortunately we had our dance teacher with us. It was really fun for our little ones too, and Friedhelm was absolutely thrilled. 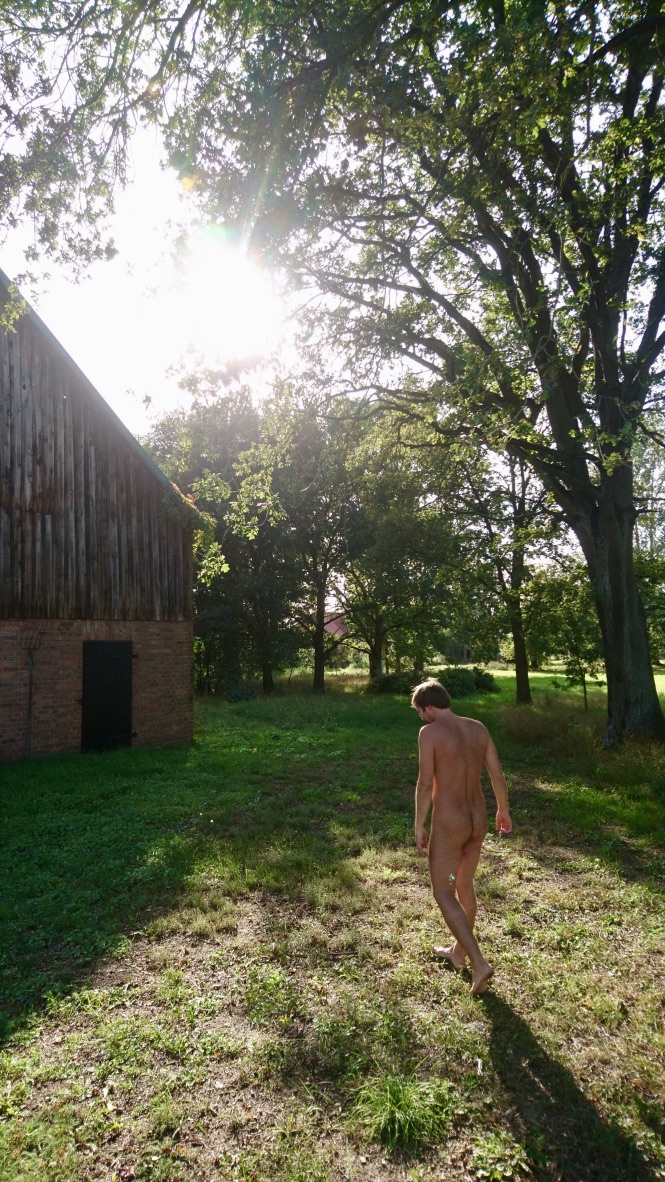 Finally it was time to start. Our hiker had been on the way back for a long time, so we cyclists reluctantly dressed again, there was a hearty farewell with the assertion that we would definitely come back next year, and we set off at a brisk pace. We didn't have that much time anymore, then loading the luggage and getting everything ready to go took longer than expected. 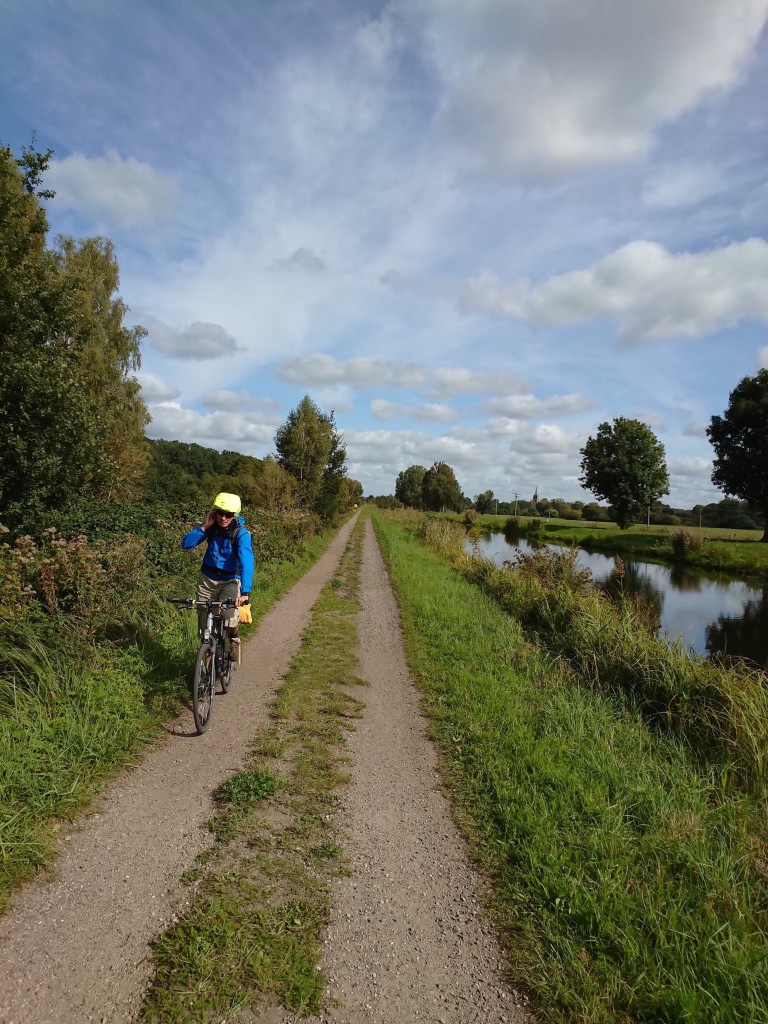 There was still some excitement because someone had dropped his bag from the luggage rack and two apostates had lost their way, but luckily we got on the train on time, though without much buffer.

On the way back we had enough time to review the beautiful day and to buy the ones we had in the supermarket under time pressure Grabower chocolate kissing full of food.