Report from our tour guide Marc:

it was very, very cool on Sunday. If you weren't there, you missed something! Certainly!

We were 19 people in total, I still can't really believe it. The sight was great, how was there like a string of pearls pilgrimage along the trail on the slope near the cannon mountains. A naked procession on the way to paradise. 🙂

Weather was just as terrific as ordered for a nude hike. Ah, but I'm going to tell you everything, so slowly, one after the other ...

Sunday, 10:30 a.m., Rübezahl car park:
I'm way too early because I'm a little excited. 22 people are on my list, 13 of them with binding commitments that were personally confirmed yesterday. Everything goes through my head. Is the route I've been thinking too short, or too long, too demanding, or too boring? No idea how different the skills and ideas of the participants are. How fast is such a group at all, otherwise I'm always alone? And anyway, 2 people want to come to the bathing area, so we have to be there at a certain time.

Questions after questions. Luckily I did another test nude hike through the area on Friday, tried out a few alternate locations, shortcuts and detours, and ensured that I chose the right route again at a few tricky intersections.

Around half past ten of course nobody is there yet, I looked for a shady spot for my bike in a corner and spread out there. Another cyclist comes a few minutes later and settles on the lamppost 20m next to me, but makes no sign of addressing me. Hmm, apparently not a fellow migrant.

Twenty to eleven, somebody comes, someone who even knows me, but I don't know how embarrassing (I never recognize anyone anyway, bad quality for a tour guide). If it is not on my list, which is not a problem, we are 23 potential hikers.

Two other people are trickling in, one of them is even on my list. Fine. The cyclist next door takes heart, comes over to us and asks if we are "The Müggelberge hike". And whether he can take his bike with him if the route is too long for him.

I think some parts are pretty steep, but you can actually avoid them all. So, of course, we like to have a fellow cyclist on the hike. 🙂

Ten to eleven, we are now 6 people, of which only 2 are on my list. Where are all the promises? Another person comes up to us, looks, makes an elegant dangle and disappears between the cars. 😕
As I continue to talk, my subconscious ponders this strange behavior for a minute until it suddenly * clicks *. They're all over there! In the opposite corner, where the bus stop is!

Ok, they all picked up back there, and after a short count, we are 18 people! Madness!

Suddenly there is a lot going on. I try to make a small speech in the general bustle, briefly explain the general plan for today, introduce the board of Adolf-Koch, distribute the remaining strawberries, and off we go, still clothed, on the main street, at the playground over, in the dense forest, to the official Undressing point. 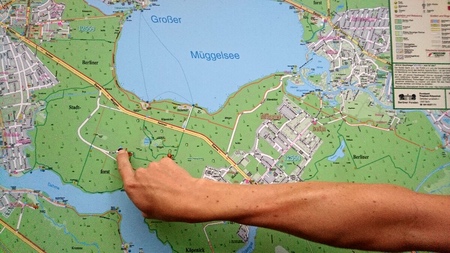 While everyone is stowing their (sometimes minimalist) clothing in their backpacks, I suddenly discover another cyclist behind the group, who watches us from a safe distance. Hmm, doesn't he dare to come over, or is he considering how to tell us about his displeasure at our shameful actions? But no, he gets off, and flops, first his t-shirt and then his pants in the backpack disappeared. Yikes, that was unexpected. A spontaneous naked bike rider? It turns out that he has been in the club for a long time and was only a little late today. He also has to leave earlier, hence the bike.

Now it really starts 19 naked hikers (!) with 2 pushed bikes, along the Teufelssee teaching cabinet. You can learn a lot about the flora and fauna here, there is a forest school (which we do not visit), a root house (everything you never wanted to know about roots), and many signs and explanations. I urge everyone to read the signs carefully, as there will be a little quiz at the end of the tour, but will not be taken seriously. Must still work on my authority as a tour guide. 🙂

It continues high on the Muggelberg. It's a bit steep on the way, I'm a little worried about the bicycle pusher, but they both master the job without any problems. The rise to the real one summit is also very steep, but since we are going to run a big loop, we can leave the wheels at the bottom. One of them even offers to stay with the bikes, so half of the group get rid of their backpacks and enjoy the feeling of complete freedom during the sweaty climb.

Above are a few photos of the large wooden cross on "Highest natural point in Berlin, 114m above sea level" done, and it goes back in a big dangle, where we collect our lonely watchman and luggage again. We follow the ridge path along the

After a proper break and a group photo, it goes to the descent towards the swimming area. I offer our two cyclists Downhill course as an abbreviation, but this is rejected thanks. 😉 You can only drive there on Saturdays anyway, according to the association regulations. The descent is varied, sometimes steep, sometimes flat,
sometimes a wide hiking trail, sometimes a narrow trail. The picture of us all coming down the path in a row is simply wonderful.

The paths so far were all very remote, so far we have met a single biker who had a great time. Shortly before the bathing place we come to the only somewhat livelier hiking trail right on the water, which means we meet a few oncoming cyclists, joggers and dog walkers. I don't even really notice that anymore, but for some fellow hikers, despite the security of the group, it made a considerable difference, as I will tell later.

The Naturist swimming area is well populated again, but unlike Friday there are also some in bathing clothes. Hump! Friday was more busy and everyone, but really everyone, was naked. However, we can get almost an entire tree for shade, and in no time the towels are spread out, half unpack the food and the other half disappear into the lake. The reactions to the latter range from Brr, how cold up to Oh, too warm. 🙂

We wait a good hour here and feel like in paradise. The board uses the opportunity to distribute flyers for our sports offers all over the site. Our two stragglers have also arrived, but decide that such a hike is too active for them today, and would rather spend the rest of the day here on the beach. One of our cyclists also says goodbye because of his appointment.

How do you pull yourself out of paradise and go on another strenuous pilgrimage? As always, you will be driven out. It suddenly rumbles and thunders from across the Long Lake and the barely blue sky draws in. I have to make a decision, flee straight back to the parking lot, or risk rain and thunderstorms and take the planned long route through the forest and over the cannon mountains? Fortunately, I choose the latter, because there is a last rumble of thunder and does not come back for the rest of the day.

We are really lucky with the weather. On Friday the sun just pounded down mercilessly. Despite the forest full of trees, it was really dehydrating. I avoided every sun-drenched gap in the canopy. Now, on the other hand, it is slightly cloudy and still pleasantly warm. Perfect!

A longer stretch goes flat through this forest full of trees until we see the Road to the Müggelturm cross (where our second cyclist says goodbye and cycles naked towards the main road), and it goes up into the mountains again, this time the Cannon Mountains. They are called because they are full cannon are, I explain, but the board of directors made wise in Wikipedia, artillery exercises were actually held up there, which led to the name. As the signposts announced below, there is supposedly a “view” above, but the only thing you see is the Müggelberg opposite with the radio station that we passed at the beginning of the day. It's amazing how far away it looks from here.

The weather can't really decide whether to sunbathe or rain, but according to a joint survey, I decide to include all of my planned ornations in the way back. Our troop winds its way up and down the narrow hills again, crosses the mosquito forest zone twice with bold death until we are finally back on Teufelssee, where we unfortunately have to wear civilian clothing again.

And we stayed dry, only at the parking lot does it start to rain, but there is still a big farewell round, including applause for the guide (many thanks to all of you!), The route has fallen (just too short, I hear from one Corner), weather was great, and we all agree that we should do it again.

Everyone is on their way home, only the people who absolutely wanted to go to football in the afternoon still have time to visit the beer garden. 😮 When I finally sit on my bike on the way home, it starts to pour like crazy and doesn't stop for half an hour. I'm completely soaking wet, but it's so warm and I'm so heated that it's just really refreshing. I want to cheer and cheer, and it's not just me, an inline skater also uses a red phase to cheerfully slide backwards with arms outstretched down the main road in the wrong direction… 😮

Yes, gosh, what a great day! 19 people, who would have thought that. I would have been happy about five. The sight of our never-ending group sometimes seemed a bit surreal as we came along the forest. For most people, a hike like this was a completely new, first-time experience. Maybe someone would like to write again how he / she felt, would be very interesting to me.

Well, enough talk, I have to sleep. Until the next hike! Maybe you can organize one in the Elbe Sandstone Mountains? I will be back on Friday, this time with a textile hiker, and I am wondering whether I should still hike naked or whether it looks strange, what do you think ...?!? 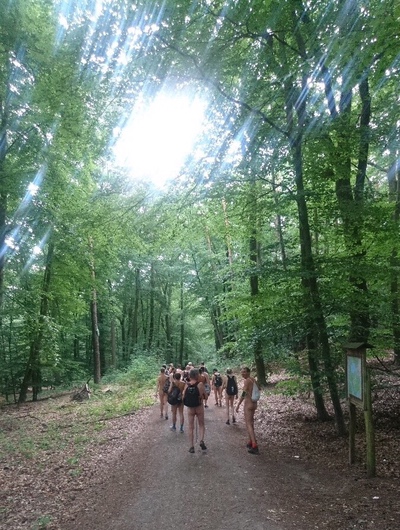 Behind the Müggelturm car park